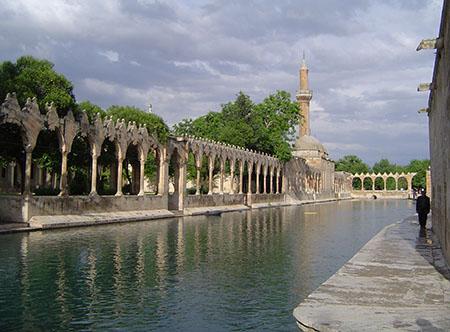 The Balikligöl in Urfa, said to contain holy fish.

A report by one of the travellers

Having spent the first 35 years of his life based in Andalusia, mostly Seville, Ibn 'Arabi left for the East in 1200 never to return. After some years in Mecca, he travelled north to Anatolia in 1204 in the company of the father of Sadruddin Qunawi, to visit the Seljuk kingdom. In addition to travelling extensively in the region, from Iraq to Syria and Egypt, Ibn ‘Arabi also had a house in Malatya in south-eastern Anatolia, until in c.1223 he made his home in Damascus, where he died in 1240, aged 75.

Almost all the information we have about the life of Ibn ‘Arabi comes from stories in his writings, and from clues such as the date and place details given at the end of manuscripts. While there is considerable autobiographical information about the part of his life in the Maghrib, there is very little after that, and it is a painstaking exercise to piece together the details.

A party of 22, we began our visit with two days in Konya, the capital of the Seljuks of Rum and home of Sadruddin Qunawi, Shamsi Tabrizi, and Jelaluddin Rumi. It also houses a major collection of Ibn ‘Arabi manuscripts, part of Sadruddin’s private library, at the Yusuf Aga library, a visit to which was hosted by the director, Bekir Şahin.

We travelled eastwards by bus, stopping in such places as Kayseri, Malatya, Urfa, and Mardin. In addition to sites directly associated with Ibn ‘Arabi or the Seljuks, visits were made to their Christian antecedents: sites in Cappadocia (Gümüsleri, Göreme), with associations to the Greek Orthodox tradition of St Basil and St Gregory, and churches in Mardin, the seat of the patriarchate of the Syriac church, which still uses the language of Jesus, Aramaic, in its liturgy. There were visits to places associated with the later Sufi tradition of Anatolia, such as the tomb of Hajji Bektash. Echoing the living quality of the journey were the verses of Somuncu Baba (a saint famous in Bursa as a transmitter of Ibn ‘Arabi’s teachings) at his tomb in Aksaray: 'We are living, never dead; we are never left in darkness. We can never be rotted in the ground; for us there is neither night nor day.'

As we arrived in Urfa, a city associated strongly with the story of Abraham and Nimrod, a freak hailstorm appeared to confirm the Quranic verse 'O fire, be cool and peace for Abraham' (Q.21.69), which is commemorated there.

The old city of Malatya, where Ibn ‘Arabi lived for many years, is now a ruin in an agricultural setting. So there is tranquillity, and a sense that it retains its quality. It is here that Badr al-Habashi, for 20 years the friend and companion of Ibn 'Arabi, was buried.

We returned to Istanbul by air, and spent three days there, including visits to the Suleymaniye mosque and its library, where the director, Nevsat Kaya, showed us the manuscript conservation and digitising work being done there, and finally to the Turkish and Islamic Arts Museum, where we were privileged to see the original manuscripts of the Fusus al-Hikam and Futuhat al-Makkiyya, in the care of Professor Mahmud Kilic, President of the Museum and a Fellow of the Muhyiddin Ibn 'Arabi Society.