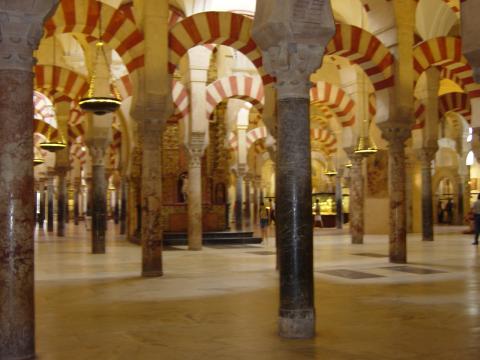 The Great Mosque of Cordoba

Our last study tour of Andalusia opened with a conference entitled The Unending Journey on October 3rd-5th, in Murcia, and we then travelled across Andalusia for 12 days by coach, stopping in Granada, Almeria, Cordoba, Ronda, Tarifa, Arcos de la Frontera, Carmona and Seville.

'a travel experience with a spiritual dimension'

These tours are designed not simply to visit great buildings and works of art but to embark on a double journey, internal as well as external. We aim to penetrate beneath the visible layers into that buried history of the saintly men and women who lived in these places, and bring to life their world and experience within ourselves.

The itinerary followed in the footsteps of Muhyiddin Ibn ʿArabi, starting in Murcia, Ibn ʿArabi's birthplace almost 850 years ago, with a 2-day seminar. We then travelled across Andalusia visiting all the major centres of Islamic Spain, including Cordoba, Granada, Ronda and Almeria, as well as less-known places where the breath of al-Andalus can still be felt and experienced. The tour concluded in Seville, the town where he spent most of his early adult life. It included specialist guides, meetings with contemporary Sufi practitioners, hands-on classes on traditional geometry and Islamic art as well as a final evening of flamenco. Lectures, readings from Ibn 'Arabi's writings and discussion are a special feature throughout the tour.

The tour was led by two senior research fellows of the Muhyiddin Ibn ʿArabi Society, Stephen Hirtenstein (author of The Unlimited Mercifier) and Jane Carroll (a specialist on Islamic architecture and geometry).

See an interactive map of the 2014 tour, with a full itinerary.

Read a traveller's reflections on the 2011 tour.

Every day had at least one unique and memorable highlight, and often there were many. I am still having flashbacks of sunlit vistas of land and sea, of ancient mosques peeping out from their covering of stone church buildings, of minarets apparently bell-towers, and of the general kindness and friendliness of people – both companions on the trip and those we met in the country; and behind and above all, the momentary, fleeting and arresting sense that maybe one was actually standing in the very footsteps of the master himself.

I must admit that this was the best journey I have ever had. The only thing I wish was that we had had a bit more time in some towns and cities - the places have started to mix up very quickly in my memory now. On the other hand, the sense of fleeting time and the impossibility of grasping  the present is the essence of Zen Buddhism... I must admit the journey created  a strong sense of solidarity and friendship among the participants. I hope this will last forever.

We cannot thank you enough for the wonderful trip you arranged through al-Andalus in the footsteps of Ibn ‘Arabi. We learned so much and it was wonderful to visit places that still echo with the Spirit of the great figures who lived and prayed in the traditional world of the Master.  It was a pure joy to travel with such a refined and spiritually attuned group, and we hope to join you in the future for more journeys tracing the steps of the Master.

You have done an astonishing thing with this Tour. We particularly want to comment the frequent readings on the bus. These truly helped "set a tone" for the places we visited and the things we saw. Those readings gave the entire tour a "depth dimension" unavailable on any other kind of tour. I would recommend it to anyone interested in the mission of this Tour -- obviously, not everyone, but for anyone interested in the inner way (tasawwuf), it was incomparable.  Thank you soooooo much!