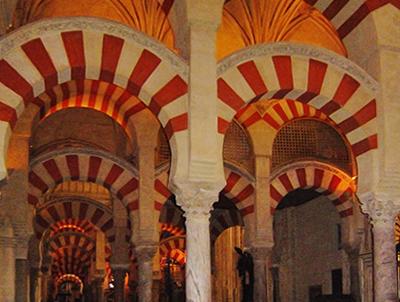 Arches in the Great Mosque, Cordoba

The impressions of one of the 'tourists'

Twenty-two people from all over the world signed up, brave pioneers since no-one knew quite what to expect. The tour coincided and began with the first conference in honour of Ibn ‘Arabi ever to be held in Cordoba, a city that loomed large in his youth not simply for the famous meeting with Ibn Rushd but more importantly as the place where he irrevocably committed himself to the spiritual life. This followed his realisation in the Great Mosque of Cordoba, as the Almohad Sultan, the most powerful earthly ruler in Ibn ‘Arabi’s experience, was praying: the young Ibn ‘Arabi, a mere 18 or 19 years old, was struck by the thought that this world is worth nothing if such a powerful potentate humbles himself before God, that all earthly power is subject to the Divine. This, he wrote, prompted him to abandon his career in the army, leave behind all his possessions in the care of his father and strike out alone upon the spiritual path, in whatever direction it might take him. He had no spiritual master at this time, other than a total inner conviction of Divine Guidance.

This event in Ibn ‘Arabi’s life was the beginning of our inner and outer journeying together, in his footsteps, and for 3 days we stayed in Cordoba as guests of the Foundation Roger Garaudy, which was hosting the excellent conference. For Ibn ‘Arabi it was the city where he had his vision of all the prophets and saints descending from the skies. For modern Cordobans it is a city under the patronage of the angel Raphael (the healer of the sick). As one participant put it, 'I could not possibly have asked for more than to wake at first light our first morning in Cordoba to a view from my bed directly across the street to the eastern gates of the Mezquita, a white dove perched above the capital. However, in the generous spirit of the City of Abundance, a couple of hours later the doors swung open onto the Patio of the Oranges. For a better location next time, it would be necessary to set up sleeping pavilions among the orange trees or string hammocks between the marble pillars inside.'

Then we were on the road for 9 days with Gabriel as our bus-driver, through all the major towns and villages of Ibn ‘Arabi’s youth: Granada, Almeria, Ronda, Tarifa, Carmona and Seville. Stories from his life were read and told and retold, evoking a powerful and palpable sense of the times in which he lived, his masters, his friends.

The final words on this remarkable journey are from one of the participants reflecting on the trip upon their return: “Every day had at least one unique and memorable highlight, and often there were many. I am still having ‘flashbacks’ of sunlit vistas of land and sea, of ancient mosques peeping out from their covering of stone church buildings, of minarets apparently bell-towers, and of the general kindness and friendliness of people – both companions on the trip and those we met in the country, and behind and above all the momentary, fleeting and arresting sense that maybe one was actually standing in the very footsteps of the master himself.”