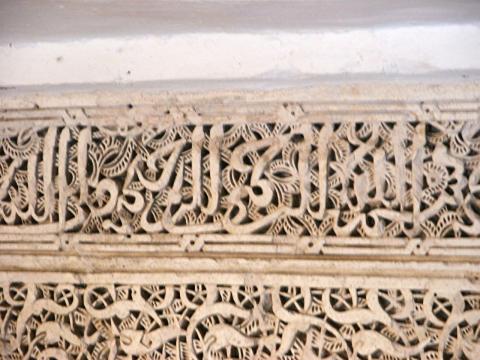 Detail from the Finana mosque

REFLECTIONS ON A JOURNEY THROUGH ANDALUSIA

In the early fall of 2011, my wife Suzanne and I joined about 20 other travelers in a journey through southern Spain or Andalusia. Led by Stephen Hirtenstein, that journey focused on Islamic Spain as we traced the early life of the great Sufi writer and thinker Ibn Arabi, a prominent resident of al-Andalus during the late 12th century. My own experience of this journey was refracted through the lens of a tourist, of a practising historian, and of a spiritual seeker.

Tourism sometimes conveys notions of superficiality, fun and games aboard ship, and of unknowing westerners blundering their way offensively into alien cultures. And yet tourism has a long and distinguished history as a means of learning and insight. The Greeks of the classical era, after all, made tourist trips to Crete, visiting what was to them an ancient civilization. So even at the level of tourism, our trip was a rich experience, made all the more charming by a certain unpolished quality. It was not a highly packaged or absolutely efficient trip of the kind organized by commercial tour companies. It was largely a one-man operation, led by a scholar very familiar with southern Spain. On occasion we got a little lost in finding our hotel as the bus driver, a lovely man named Pedro, seemed to be of the “real men don’t ask directions” school of thought. In one amusing incident the leader of the tour asked if anyone in the group had a map. All of this gave the journey a delightful informal quality and a “we’re all in this together” sensibility.

As a tourist, I caught glimpses of contemporary Spain—its enormous efforts at generating electricity through windmills, its vast olive oil industry reflected in mile upon mile of olive orchards, its huge greenhouses for growing vegetables, few of which actually showed up in our meals, and much more. We stayed in fine hotels, including one which boasted a room in which the poet Rilke had lived and written. Being alone in that room for a time was especially meaningful for Suzanne, who has long loved Rilke’s poetry, and for Barbara, another member of our group who is giving a course on Rilke in the fall. The sheer physical beauty of Andalusia was also apparent almost every day. Our huge and very comfortable 55 passenger bus traversed narrow winding roads and mountainous landscapes for which it was never intended, skillfully navigated by our fearless driver. Once we asked him how he liked driving in such terrain. His reply suggested a certain pride in his professional achievement, but he also added: “It has cost me.” One other dimension of the tourist experience was my utter dependence on Suzanne since I am altogether ignorant of the Spanish language. She is reasonably fluent in Spanish, owing to a year spent in Spain as a young doctoral student pursuing research on Garcia Lorca.

The second lens through which I experienced this trip was that of a historian, with a specialization, if you can call it that, in comparative world history. Just before beginning the trip, I had finally retired from active teaching after some 40 years in various universities. So I came to this experience with the sensibility of a historian accustomed to focusing on “big picture” processes. I had little real knowledge of al-Andalus, except as the site of a remarkable encounter between the worlds of Islam and western Christendom.

What was impressive to all of us were the many layers of history disclosed in our various stops along the way—Carthaginian, Roman, Visigoth, Arab/Berber/Muslim, Spanish Christian—each of whom built their structures atop that of their predecessors, often incorporating something from the past. Since our primary focus was primarily Islamic, we paid particular attention to the intersection of Christian and Muslim elements. A number of the great cathedrals as well as smaller churches that date from the years of the reconquest and later showed evidence of cross-cultural interaction, a major theme of World History. Most dramatic, of course, was the construction of a huge cathedral right in the middle of the Great Mosque of Cordoba. The outcome was grotesque in some ways, but was perhaps the price of preserving that magnificent mosque. More touching surely was a small town church that contained the mihrab of an older mosque in which was now situated an image of Jesus. And the Alcazar of Seville, even under Christian rule, made extensive use of Islamic architectural and artistic elements. All of this serves as a reminder of the great historical significance of Islamic Spain and its role as a conduit of Greek and Arab culture and learning to the dawning civilization of western Christendom.

More generally, I was also reminded forcefully of the transience of all things human, not only individual lives, but also civilizations, political regimes, religions, social structures, and of course the material life of human societies. Equally impressive, however, was evidence of the enormous human effort and creativity that went into the making of these civilizations. Finally, the trip provided an occasion to ponder the relationship of history to the present. From the perspective of historians, there is no such thing as an unambiguous “lesson of history.” Rather the record of the past invites us to choose our history, to decide which elements of an enormously complex and variegated past we will elect to build upon. In the case of Andalusia, do we choose to build on the century or so of relative harmony and religious tolerance that allowed Muslims, Christian, and Jews alike to live together and to contribute to a remarkable chapter of peaceful interaction and cultural construction? Or will we build our future on those periods of conflict, conquest, and intolerance? The point here is that the past does not determine the future, even though it sets limits and structures the agenda of the present. We can find what we want in the past; the future, to some extent at least, remains open.

The third lens through which I experienced our journey in Andalusia was that of a spiritual seeker. Suzanne and I had been looking for a travel experience with a spiritual dimension, and in Stephen’s tour, we found one that suited our own eclectic paths. We have both been engaged in a Sufi community for some years, while I remain involved in the Christian tradition and she in that of Buddhist meditation. Our spiritual touchstone for the trip was Ibn Arabi in whose footsteps we traveled throughout southern Spain. We visited places where Ibn Arabi had some of his most profound spiritual experiences: in the ruins of Roman Italica, where he had a vision of Moses, Jesus, and Muhammad; in the Great Mosque of Cordoba where he renounced worldly ambition to follow the “path of God”; and also in Cordoba where in the year 1190 he encountered the whole line of prophets from Adam to Muhammad. Stephen introduced us, via The Sufis of Andalusia, to some of the people that Ibn Arabi met in these and other places.

Perhaps I should confess that I was a little skeptical as to what I might gain from this encounter with Ibn Arabi. I had read nothing of his work, and my sole exposure to him came through reading Stephen’s lovely book, The Unlimited Mercifier, just prior to the trip. Furthermore Ibn Arabi had spent his entire life in the company of Sufis without a worldly occupation. He had profound mystical visions and spiritual encounters with any number of prophetic and saintly figures. None of this corresponded to my own more modest experience. Furthermore, his formulations, as I met them in Stephen’s book, sometimes seemed to me overly schematic and hierarchical, in contrast to Rumi’s “come, come, whoever you are” sensibility, with which I was somewhat more familiar. In sharing these reservations with a Sufi friend who loved Ibn Arabi, I received this very thoughtful comment: “Perhaps Ibn Arabi gives the view of the traveler, the pilgrim, who takes in the whole panorama of the spiritual world.  He circumambulates and embraces the whole sacred ground.  Mevlana, meanwhile, stays in the center and, with his longing, draws that sacred world near, all the while simply turning.”

Though I continue to struggle with what little I know of Ibn Arabi, this reflection has been helpful. And the trip introduced me more vividly to elements of his early life, for as Stephen frequently pointed out, his biography and his teachings are inseparable. So I have acquired a foundation for further reflection and something of a larger context from which to pursue more of Ibn Arabi.

In the meantime, there is a phrase from his writings that has struck a chord with me. It is “the private face of God.” I am not entirely clear as to precisely how he understand that concept, but to me, it speaks of the profound individuality of our spiritual paths. Each of us has a distinct, unique and personal experience of the Divine, conditioned by our history, education, family background, and a thousand other variables. This is an awareness that resonates with St. Paul’s injunction to “work out your own salvation.” It is a sensibility that saves us from judgments about others, and it provides an opening to the kind of universal spirituality that, I am told, underlies Ibn Arabi’s teachings.

Actually the trip itself provided several occasions to experience and reflect on those “private faces.” One of them derived from recognizing the immense energy of spiritual seeking that lay behind the many temples, churches, and mosques that we visited. Each of them, of course, was distinctive and conditioned by the political and economic circumstances of the time. But it was hard to avoid the sense that all of them reflected an awareness of an Unseen World to which they were seeking access. The trip allowed us to honor and even celebrate that seeking, while linking it to our own.

And then there were our companions on the journey—Stephen, our wonderful guide; Jane, our art historian and teacher of sacred geometry; and the 20 or so fellow travellers/pilgrims on the bus. Encountering these people was itself a rich part of the trip. I was impressed with both the distinctive paths that each of them followed and yet with the common yearning that informed those paths. In that setting, conversations about matters of the heart flowed easily. Stephen proved to be not only a knowledgeable guide to Andalusia and Ibn Arabi, but also an accessible and very thoughtful spiritual friend.

Somewhere along the journey, Stephen said something to the effect that the task ahead lay in discovering the universal dimension of our particular traditions of spiritual seeking and that Ibn Arabi could be a useful guide in that task. It is a task to which I would like to contribute as I enter my retirement years. For that inspiration, and much else as well, I am enormously grateful for the opportunity to have made this journey through Andalusia.                               (Robert)