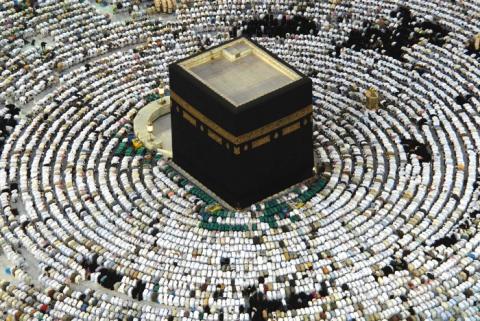 In 1200 Ibn ʿArabi left Andalusia for the last time to perform the pilgrimage to Mecca. Here he began many writing projects, notably his monumental al-Futuhat al-Makkiyya (Meccan Illuminations). The writing of this 37-volume work, which contains a complete esoteric exposition of the Quran and the Way of Islam, would take the next 29 years to complete. This book was inspired by his meeting with the mysterious Youth.

While in Mecca he met "a group of the most eminent men and women, the elite of spiritual good behaviour and learning". Amongst them was a beautiful girl called Nizam, a shaykh's daughter, who became the inspiration for his wonderful collection of poems entitled Tarjuman al-ashwaq (Interpreter of Ardent Desires).

His spiritual inheritance from the Prophet Muhammad was further exemplified by a vision of the Kaʿba built of bricks: the silver ones denoted his complete conformity to the prophetic law, the gold ones represented his interior nature.