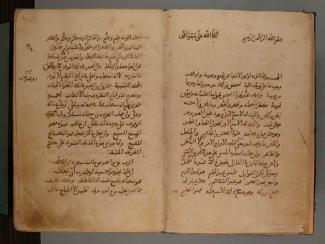 The opening page of the Futūḥāt in the author's hand
Ibn ʿArabi's al-Futūḥāt al-Makkiyya is surely one of the most remarkable compendia of esoteric teachings ever written.
Composed over a period of nearly 30 years, the first recension was completed in 629/1231. The second recension took four years and was completed in 636/1238.
It contains 560 chapters on every conceivable subject, a summary of all the spiritual wisdom which had been nurtured within Islam from the time of the Prophet Muhammad to Ibn ʿArabi's birth 560 years later.

Ibn ʿArabi wrote two drafts of the Futūḥāt, the second of which runs to 37 volumes and is preserved in the Turkish and Islamic Arts Museum in Istanbul. This second recension forms the basis of a new edition by 'Abd al-'Aziz al-Mansoub.

"If the properly prepared person persists in remembrance (dhikr) and spiritual retreat, emptying the place [of the heart] of thinking, and sitting like a poor beggar who has nothing, at the doorstep of their Lord, then God will bestow upon them and give them some of that knowledge of Him, of those divine secrets and supernal understandings, which He granted to His servant Khadir. For He said 'A servant from among Our servants to whom We have given Mercy from Us and to whom We have given knowledge of what is with Us' (Q.18.65)."