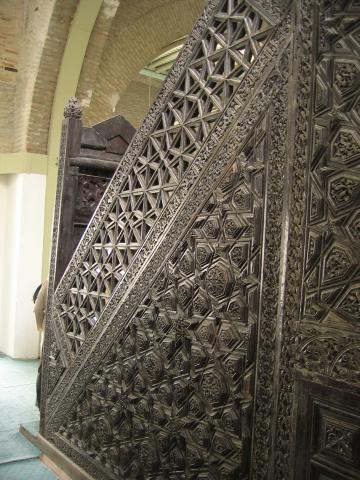 the Seljuk minbar in the Alaettin mosque, Konya

One of those whom Ibn ʿArabi met in Mecca was the vizier to the Anatolian Seljuk sultan, Majduddin Ishaq al-Rumi. The latter persuaded him to travel with him to Anatolia in 1204. There Ibn ʿArabi befriended the Seljuk sultan and his sons, and settled in Malatya in south-eastern Turkey, where he raised a family, having at least two sons and a daughter. He also took on responsibility for Majduddin's son, Sadruddin al-Qunawi (Konevi), after his death.

In approximately 1223 he moved to Damascus, which was then under the rule of the Ayyubids, the family of Saladin. His writing and teaching continued, with many renowned disciples flocking to his sessions. These included Shams-i Tabriz, the famous initiator of Jalaluddin Rumi. 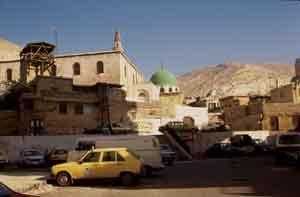 Sadruddin underwent a thorough training at his master's house in Damascus, and would become the foremost interpreter of Ibn 'Arabi's teachings. He wrote of Ibn 'Arabi:

“He had the power of meeting with the spirit of any of the prophets or saints of the past whom he chose. He was able to do this in three ways: sometimes he made their spirit descend into this world, where he perceived them in a subtle corporeal form similar to the one they had when alive; sometimes he induced them to present themselves to him in sleep; at other times he cast off his own corporeal form so as to meet them.”

In 1229 Ibn ʿArabi had a vision in which the Prophet Muhammad handed him the Fusus al-hikam, a work considered by many to be the quintessence of his teachings.

By December 1231 the first draft of his great al-Futuhat al-Makkiyya was complete: 560 chapters devoted to every aspect of the spiritual life. He then set about a second draft, which he finished within four years. He also compiled a vast collection of his poetry into a Diwan.