Adornment of the Substitutes 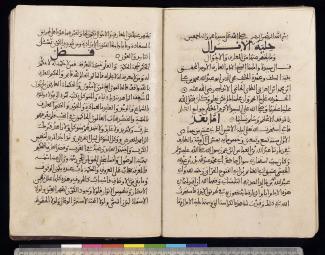 One of the most popular short treatises, with dozens of manuscript copies, the Ḥilyāt al-abdāl describes the four essential principles of the spiritual Path, which lead to the inner transformation of the human being and completion. Written in response to a request by his close disciple Badr al-Ḥabashī, it was reportedly completed in the space of an hour, in the year 599/1203 in Tāʾif while on a visit to the tomb of the Prophet's cousin, ʿAbd Allāh Ibn ʿAbbās.

"At Marchena of the Olives in al-Andalus we once had a companion, one of the men of sanctity, who used to teach the Quran. He was an excellent jurist, who knew the Quran and hadith by heart, a man of piety and merit who served the poor. His name was ʿAbd al-Majīd b. Salama. He, may God grant him success, once told me the following incident: “One night I was praying, and I had just finished my prayer and had put my head between my knees invoking God when I felt someone’s presence. This person shook off my prayer-mat from under me and replaced it with a palm-leaf mat. Then he said to me: ‘Perform your prayers on that!’ Now the door to my house was shut and fear of him took hold of me. He said to me: ‘One who enjoys intimacy with God feels no fear’. Then he added: ‘But fear God in every state’.

Then I had an inspiration and asked him: ‘O my lord, by what means do the Substitutes become Substitutes?’, to which he replied: ‘By the four things which Abū Ṭālib [al-Makkī] mentioned in the Qūt [al-Qulūb]: silence, seclusion, hunger and vigilance.'

Then he left me, without my having a clue as to how he had come in or how he had gone out, for my door remained closed and the palm-leaf mat was still under me.” This man was one of the Substitutes, whose name was Muʿādh Ibn Ashras, may God be satisfied with him. The four things which he mentioned are the pillars of this most radiant Way and its foundations. One who does not involve himself in them or is not deeply grounded in them strays from the Way of God, exalted is He!"