Unveiling the Results of Journeying 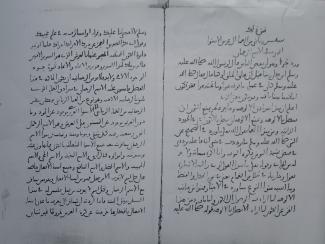 A page from the autograph Yusuf Aga 4859
Written ca. 610/1214, this book describes the meaning of spiritual journeying, the different kinds of traveller, as well as various types of journey. The sixteen journeys or voyages described range from ones accomplished by the Divine (for example, in descending into creation) to those undertaken by various prophets. The only journey Ibn ‘Arabi unqualifiedly approved of is one where the traveller does not take a single step by himself but is ‘carried’ by the Real, whether spiritually, physically or both together. It is a journey of paradox: a journey in which the traveller stays perfectly still.

“... It is not my intention to explicate the actual story in [the case of the prophets]. These voyages are only bridges and pontoons that are placed for us to cross over upon to our essences and the states that are specific to us. There is utility in them for us, since God has set them up as passageways for us. "And all that We relate unto thee of the story of the messengers is in order that thereby We may make firm thy heart. And herein hath come unto thee the Truth and an exhortation and a reminder for the believers" (Q. 11:120). How eloquent is the Most High's saying: "And herein hath come unto thee the Truth," and His saying: "as a reminder" of that which is in you and with you of that which you have forgotten. What I have narrated to you is to remind you of what is in you and what I have called to your attention, so you will know that you are everything, in everything, and from everything...”

See also...
Ibn ʿArabi in the East (1204–40)
Related Links
An Introduction to the Kitāb al-Isfār, by Angela Jaffray
Copied to clipboard