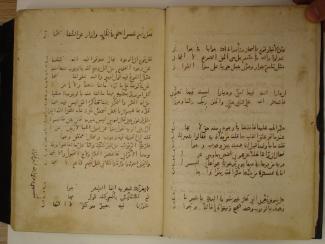 Compiled over a number of years and apparently completed by 634/1237, this collection includes some 3,500 poems, many of which appear in other works (for example, the Fuṣūṣ and Futūḥāt). It seems to have been organised not simply as one collection but as an arrangement of poems according to at least three particular orders, two of which are alphabetical. The printed Bulaq edition represents approximately 25% of the total. About one-third of the poetry exists only in manuscripts and has never been printed.

“The reason which has led me to utter poetry (shiʿr) is that I saw in a dream an angel who brought me a piece of white light, like a fragment of the sun’s light. ‘What is that?’ I asked. ‘It is the Sūrat al-Shuʿarāʾ (the Poets)’ was the reply. I swallowed it, and felt a hair (shaʿra) arising from my chest to my throat, and then into my mouth. It was an animal with a head, a tongue, eyes and lips. It grew out of my mouth until its head struck the two horizons, the East and the West. After that, it contracted and returned into my chest, so I knew that my words would reach the East and the West. Then I came back to myself and I uttered poetry without any process of reflection or thought. Since that time, this inspiration has never ceased; and it is because of this sublime contemplation that I have collected together all the poems that I can remember in this Dīwān. But there is much more that I have forgotten! Everything that this collection contains is thus, praise be to God, nothing other than [the fruit of] a divine projection, a holy, spiritual inspiration, and a splendid, celestial heritage.”

I have a love that has the name

of all who have a name

That is what I allude to

in [both] clear and obscure [speech]

by referring to Rubab

to Hind and to Salma, I mean

only Him, so consider Him

for He is the name that is named.

And the one who does not know what I am saying

is blind to the way of Truth/God.